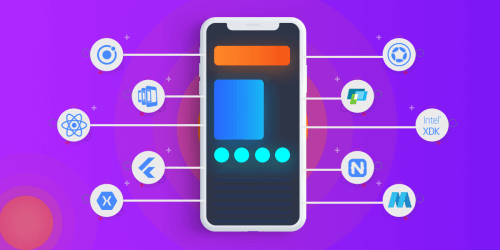 Capable of building native looking apps, Ionic framework has gained popularity in the recent past and results are overwhelming when worked in combination with AngularJS. Developers have preferred it for cross-platform app development particularly due to its extensive list of features, predefined elements and of course, a large community of developers who are always ready to help you.

Read also: React Native vs. Ionic: The Bulls Are On A Roll!

Topping our list of hybrid app development frameworks 2020 is React Native. It enables developers to build cross platform apps with minimal effort that grant a native-like experience to the end-users. There is a vast community of developers to assist you in case you come to a state called deadlock. Although the framework is not advised for beginners to try their hands on, the huge community encourages them to dive in and explore.

Founded in 2011 and owned by Microsoft, Xamarin is one of the hottest tools for building cross-platform apps. Developers can leverage the same code for different operating systems including Windows, Android, iOS, MacOS and more. The apps built using this mobile framework offer native experience and are aesthetically-sound. Its ability to reuse code, tools and functions make the process quick that helps in saving a significant amount of time.

No matter what, you cannot rule out this exceptional tool for hybrid app development from the list. It enables developers to use the same code for different platforms and use their existing website development knowledge to quickly build apps that are supported by multiple mobile operating systems. Knowledge of HTML, CSS, and JavaScript is enough to get started with PhoneGap app development. So, what are you waiting for?Get on with this tool and stun the world with your outstanding applications.

It is a full features HTML Framework for designing iOS and Android apps. Framework 7 CLI is an extremely powerful tool and the most recommended way to start Framework 7 app development.

It is an open-source mobile app framework licensed to use it for free under MIT. Developers are required to make use of the Angular framework in combination with Bootstrap to build amazing mobile app experiences. However, there is no dependency on jQuery or any other Bootstrap libraries. Plus, there are several UI components like scrollable areas, navbars, switches, overlays and more that developers can use to build seamless mobile applications. Users will be treated with a smooth, intuitive and attractive user interface.

It is an open-source hybrid mobile app  framework, relatively new, but good enough to compete against the likes of some well-established names above in this list. It features a large collection of ready to use components. Developers are enabled to write apps in HTML5 and JavaScript and combine the same with PhoneGap or Cordova to build a fully-featured app. It is free, easy-to-use, flexible and has semantic markup components for developers to get the benefits.

Corona SDK is a Cross-Platform Mobile App Development for Enterprises, Education and 2D Games that is 4x faster.  It utilizes Lua as a scripting language in real-time testing.

It is an HTML based, touch optimized, JavaScript library used to make responsive websites that are accessible on all smartphones. It makes use of features of both jQuery and jQueryUI to provide API features for mobile web applications.

Intel XDK is simplifying workflow and enables developers to easily design, develop and deploy HTML5 websites and applications across multiple websites. Besides HTML5, JS and CSS, Intel XDK can help in creating, editing and simulating apps from an integrated development environment, export to Adobe PhoneGap or Cordova CLI for compilation into native code app.

NativeScript is how you build cross-platform, native iOS and Android apps without web views. Use Angular, typescript modern JavaScript to get truly native UI and performance when you share skills and code with the web. It gives 100% access to native API’s via JavaScript and reuse of packages from NPM, cocoaPods, and Gradle. Open source and backed by Telerik.

It is a platform for developing mobile, tablet and desktop applications using web technologies. It lets you create iPhone, Android and iPad apps using JavaScript. Titanium Studio, Android XDK, Xcode (Mac) are the building blogs with JS by its side to create amazing mobile apps with Appcelerator Titanium or Appcelerator Mobile.

Kendo UI is an open-source version of Telerik Kendo UI, which is a comprehensive framework for building modern web and modern apps with HTML5 and JavaScript. It comes with 40+ widgets and framework features, these widgets can easily be themed and styled via CSS, It comes with a templating library that performs faster than jQuery Templates, optimized animations leveraging CSS3 hardware acceleration and cutting-edge UI virtualization.

This tool is meant for those who do not wish to learn a programming language in order to create a mobile application. Mobincube allows internet users to create compelling mobile apps for free. With flexibility, functionality, and customizability – Mobincube helps best mobile applications, compatible with any mobile and that can be successful across locations. It also ensures publishing apps across the Apple App Store, Microsoft’s Phone Store, and Google Play, etc.

QT is a cross-platform mobile app development framework that can be used to write applications once and deploy them across desktop, mobile and embedded operating systems. This removed redundancy. QT is partly C++ and partly native code. QT UI APIs wrap native UI components.